Yesterday Treese and I celebrated my 45th birthday by hanging out on the couch watching Ozark and playing videogames. We were playing Borderlands 3 for the PlayStation 4, which is a fun game but extremely buggy even with all the hot-fix patches that have been released. I can't tell you how many times we've seen the dreaded blue screen general error CE-34878-0 or been trapped inside one of the tournament rooms because the doors wouldn't open due to enemies either being trapped off screen or just failing to materialize, in which case the only way out was to commit suicide and loose all progress we had made during the round.

Well, yesterday we had both bugs happen again, first a hard crash and then twice being trapped, so the second time we just gave up and turned it off. We enjoy the frustration of a challenging scenario because it feels so great when we are finally able to pass it, but the frustration of failing because of game glitches is just infuriating. Luckily, I received a new game in the mail that day, a birthday gift from my parents that is from one of our all time favorite 2-player local couch co-op game series: Earth Defense Force 5! Don't let the dated graphics and hilariously bad dialog fool you, these games are a blast! You play as soldiers fighting against waves of giant bugs and alien ships through many different destructible environment, just stage after stage of increasingly difficult mayhem. So we put that on and spent much of the afternoon and evening having a blast shooting up giant ants, spiders, and alien drones.

On another note, our two new rose bushes are still doing well. The one that started blooming has even more roses now and they aren't just yellow, there is red, orange, pink, and peach petals. The other one appears to be a literal late bloomer but it looks healthy so hopefully we'll be getting some blooming rose buds very soon. 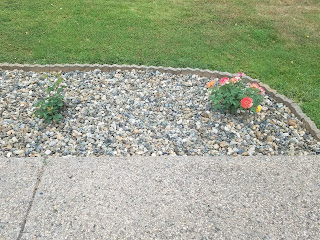 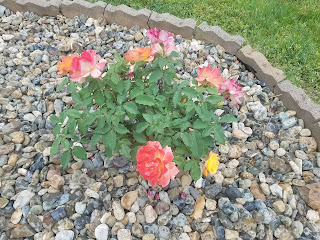 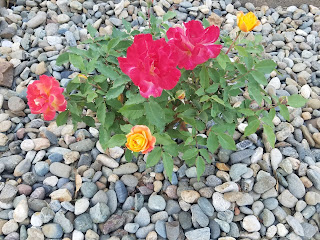 Happy Star Wars Day everyone! We had some rain over the weekend and when looking out back we noticed one of our new rose bushes started blooming for the first time! The other one looks like it will bloom pretty soon. 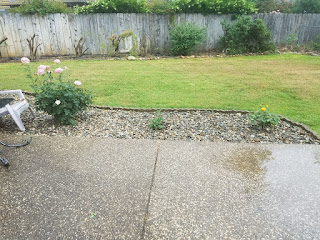 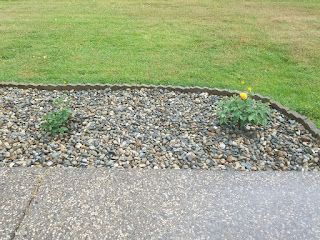 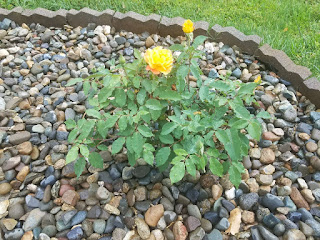 Posted by primehalo at 6:06 PM No comments:

For this new year I had intended to give a monthly update about what has been going on in my life. Well, we're now almost five months into 2020 and I have yet to give a single solitary update, so we can all see how well that went. Then I thought, should I just wait until the year is half over and to a mid-year update? The problem with that is I know myself, and I know I'd either forget or just not feel like it. So I better just do it now.

Way back in January I planted two new rose bushes in the backyard where two of the three existing bushes had died. The ground cover for these had been river rock but somehow grass and and some kind of apparent succulent ground cover started taking over, which is what we believe killed those bushes. So I had dug all the rock out and onto the patio until I made it to the old weed guard plastic which was all torn up. I thought digging up all that rock would be the hard part, but after planting the bushes I had to clean all the dirt, grass and ground cover off the rocks before I put them back so the same thing wouldn't start happening again right away. After some trial and error, I ended up using my pressure washer and our mesh wrought iron patio table. 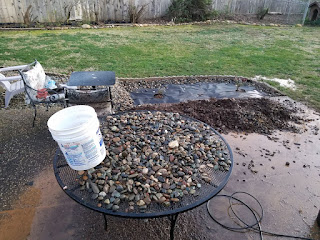 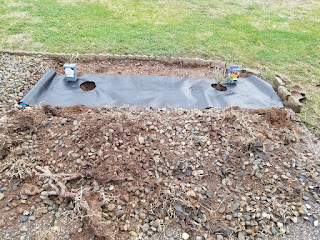 Also in January, I went to Las Vegas with my wife and her good friend. The hotel stay was covered just for attending a timeshare presentation which lasted a couple hours. While in Vegas we walked around the different casinos since they're so interesting to look at. They're almost like a theme park with no rides... although there is a roller coaster at one of the casinos. My wife and her friend played the slot machines a couple times and didn't win. I find slots to be the opposite of fun, so I opted not to participate. We also saw a Cirque du Soleil show called Zumanity which was really cool. 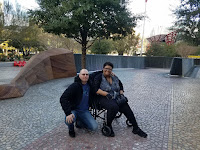 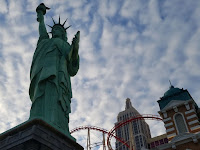 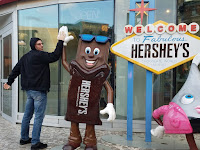 In February I won a couple gift cards just from donating platelets. I walked in for my appointment and was handed a little gift bag with balloons attached and was told I won a contest I didn't know was going on. The gift cards were for Fandango and some fancy fine dining restaurant called Clearie's. Unfortunately we didn't have a chance to use those cards because the very next day I headed to Vallejo. My grandpa was in the hospital so I went to visit him and to help out my mom with getting him transferred to a care facility. I ended up stay until mid-March so I could help get him moved to a more permanent place after he got released from the care facility and to help get my grandma moved into an assisted living facility. When I finally made it home, we still couldn't use the gift cards as everything had just gone on lockdown due to this COVID-19 cornoavirus.

This month we had our overhead microwave oven replaced. It had been giving us issues off and on for a few months and it was like 20 years old so it was time. I also replaced our tiny low-watt countertop microwave with a bigger more powerful one I picked up at a local auction. I also got a DiskStation NAS (Network Attached Storage) at auction back in January so I could stop using external hard drives attached to our router as a makeshift NAS. I've picked up a lot of cool things at auctions for rock bottom prices. I'd recommend checking to see if there are any local auctions in your area.
Posted by primehalo at 9:46 AM 5 comments:

Hope everyone had a nice holiday and got some good presents if you celebrate a holiday that involves receiving presents. We celebrated Christmas at my parents' house and since nobody else came over we were able to just stay in our pajamas all day. Treese got me some Star Wars Black Series action figures: Lando Calrissian in Skiff Guard Disguise, Bounty Hunter Droid IG-88, Sabine Wren, and a Jawa. Sabine is a relatively new character from the Star Wars Rebels TV series that premiered in 2014 while the other three are from the original trilogy. I had action figures of them back in the 80s. Remember those figures? They had such articulation as their limbs moving up and down... and maybe the head would swivel. Their little guns would either immediately fall out of their hands or would be pointing off to the side. Action figures sure have come a long way since then.
Posted by primehalo at 5:20 PM 1 comment:

Star Wars: The Rise of Skywalker

We saw Star Wars: The Rise of Skywalker last night and absolutely loved it. We both went into it without having seen any trailers, interviews, reviews, or even any of the toys. We purposely avoided any and all potential spoilers so we could go in a fresh as possible without any expectations. From beginning to end we thought it was fantastic. I was surprised to find later that a lot of people liked it less than the previous movie in the saga, The Last Jedi. I thought it was a ton of fun and am excited to check out all the new toys!
Posted by primehalo at 6:44 PM 1 comment:

This past weekend we went to a dinner party put on by my wife's work. It was smaller than last year's James Bond themed party, or perhaps it just felt that way since it was a smaller venue. This year the theme was 1920s. Everyone was dressed up and looking good in their costumes. There were a lot of guys dressed in black shirts with white suspenders which is what Treese was originally thinking of putting me in, so she was happy we did something different. We went with a white shirt with black suspenders, bow tie, and then a hat. She wore a short black dress with a pattern of silver sequins, a long pearl necklace, silver and black earrings, and one of those headband things with the feather sticking up. 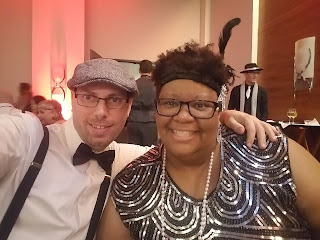 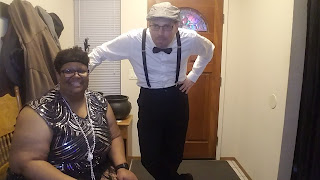 Posted by primehalo at 10:18 PM No comments:

Heaters are supposed to heat, right?

It was quite cold the day we returned from Thanksgiving break so I cut on the heater as soon as I walked through the door. An hour later we were feeling no warmth so I checked the vents. Cold air. Our nice new efficient heater wasn't heating. We had only used it a couple times prior and only for a couple hours but it had worked then. I contacted Cold Snap, the company that installed it, and one of the installers, Jon, came out the very next morning. After checking things out he determined that he had accidentally put a cap in the wrong place during the install which allowed condensation to build up instead of draining, thus clogging up the system. He spent a while up there getting it fixed. When he was done we had hot air again.

Everything was great until the next evening when the house started getting colder. I checked the vents and felt cold air. We let them know and they said Jon could come by in the morning. It was still happening the next morning but then suddenly it started blowing warm air again. When Jon arrived and did his inspection he found a hose to be the likely culprit. He said he noticed a small slit in it at the end and from what I understood, when he would touch it then it would no longer create a vacuum. So he got a new hose put in and everything seemed to be working... except that he was seeing an airflow error light show up every once in a while during the tests. We eventually found that to be caused by three of our vents being closed. Once we opened them the error went away. I also replaced the air filter for good measure.

We noticed some cold air blowing from the vents again today, but the house didn't get any colder from it. We asked and apparently that is normal. The furnace is designed to continue blowing for a few minutes after the heating stops in order to remove the heat from the unit. Makes sense. I have a heat gun that does the same thing. Now we just have to angle the vents so it doesn't blow the cold air right on top of our heads. I'd also like to say that Jon really seems like a great guy. He's been very polite and professional throughout everything. He was the one that came out after we demanded American Home Shield send someone else out for a second opinion and has been through the install, all the inspections, and now the repairs. He never made us feel like we were inconveniencing him and when he noticed he made a mistake he owned up to it and didn't try to pass it off on someone else. I respect both him and the company and wouldn't hesitate to recommend them.
Posted by primehalo at 12:08 AM No comments: